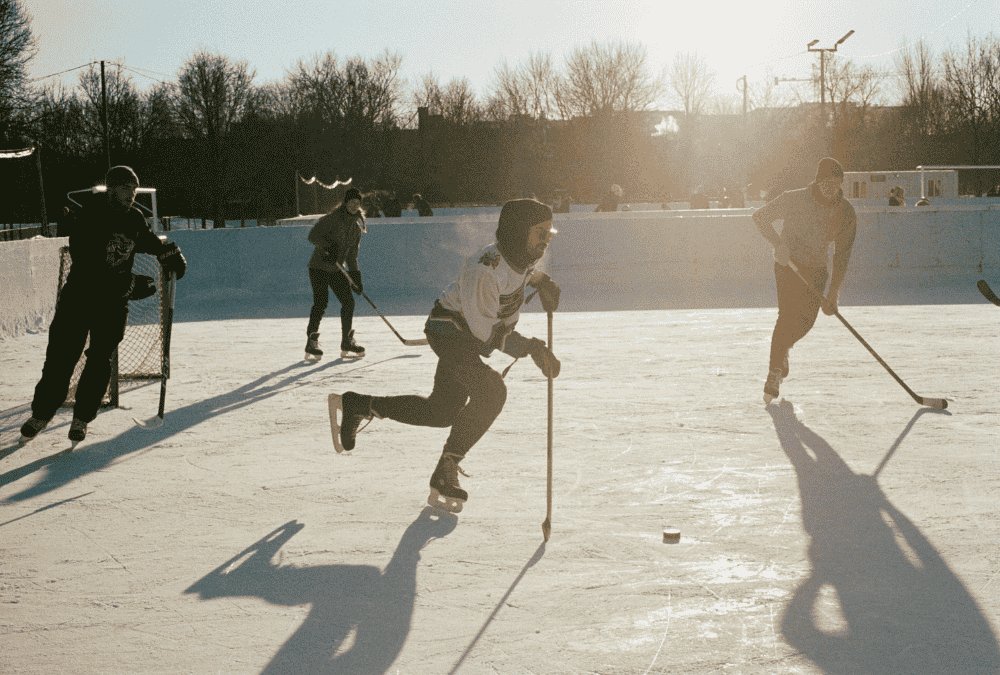 You will soon arrive in Montreal for your vacation or for your expatriation ? Did you know that field hockey is the national sport in Canada in winter? More than a sport, field hockey gathers thousands of fans and has quickly become the most popular sport in Canada . In Montreal, the city vibrates with the colors of the Montreal Canadiens, the emblematic team of the city.

Would you like to know everything about this iconic sport and the Montreal team? This article is for you.
We will enlighten you on field hockey in Montreal and how to see a game alone or with friends to enjoy the excitement of this sport that firmly unites Quebecers. 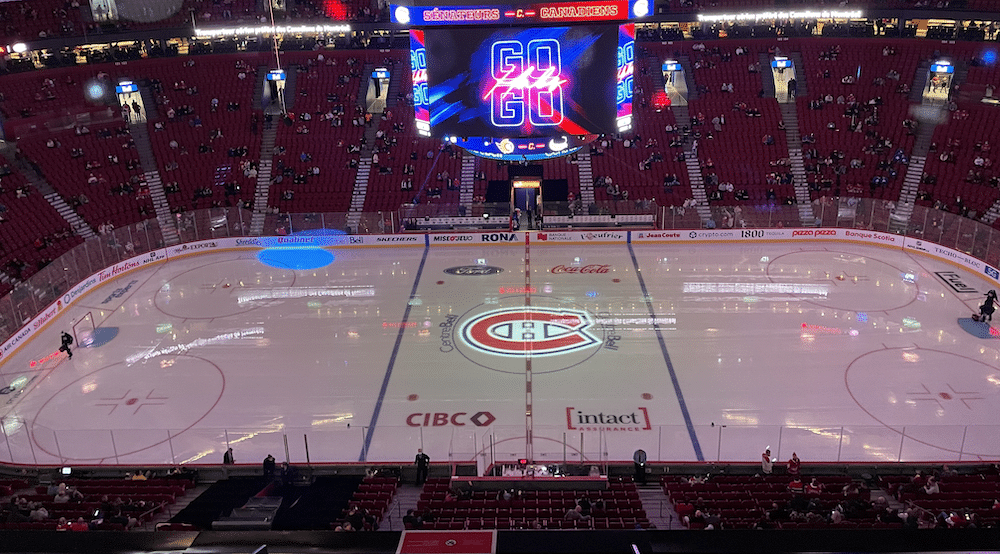 Hockey in Montreal: The NHL and the Montreal Canadiens

The Montreal Canadiens is the city's hockey club. This hockey club is to Montrealers what the Knicks are to New York or what the Olympique de Marseille is to the city of Marseille .

There is a rare fervour on game nights at the Bell Centre, you can see the pride Montrealers have for their club. You can see Canadiens jerseys on countless people. But that's not all, the most impressive thing is to see Canadiens flags on fire trucks, in bars, restaurants, shops and even on dozens and dozens of cars.

What is the NHL?

As for the hockey season, the Montreal Canadiens play in the National Hockey League: the NHL. The league includes the best Canadian and American franchises. A regular season consists of 82 games, half at home and half on the road. The 8 best teams of the East and West divisions will play the playoffs, which will add more than twenty additional games and thus bring to more than one hundred games for the finalists of the Stanley Cup. 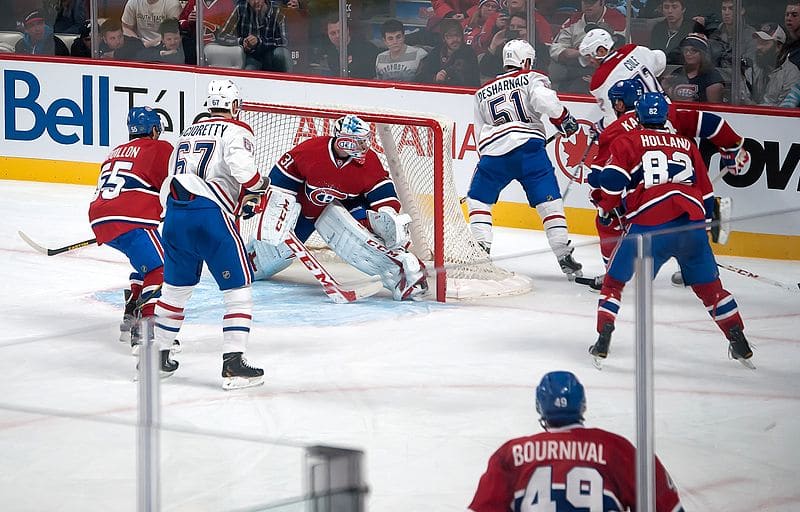 Where to see a hockey event in Montreal?

Hockey games are played at the Bell Centre in Montreal. Historically, the Bell Centre is a mythical and attractive place in Montreal, at the time it was called the Molson Centre because it was financed and built by the owner of the same name. Since 1996, it has been home to the Canadiens. Located in the heart of downtown Montreal at 1909 Montreal Canadiens Ave, the arena seats 21,302. This emblematic place of Montreal welcomes today, in addition to hockey, the biggest international stars for the great concerts and shows of Montreal. 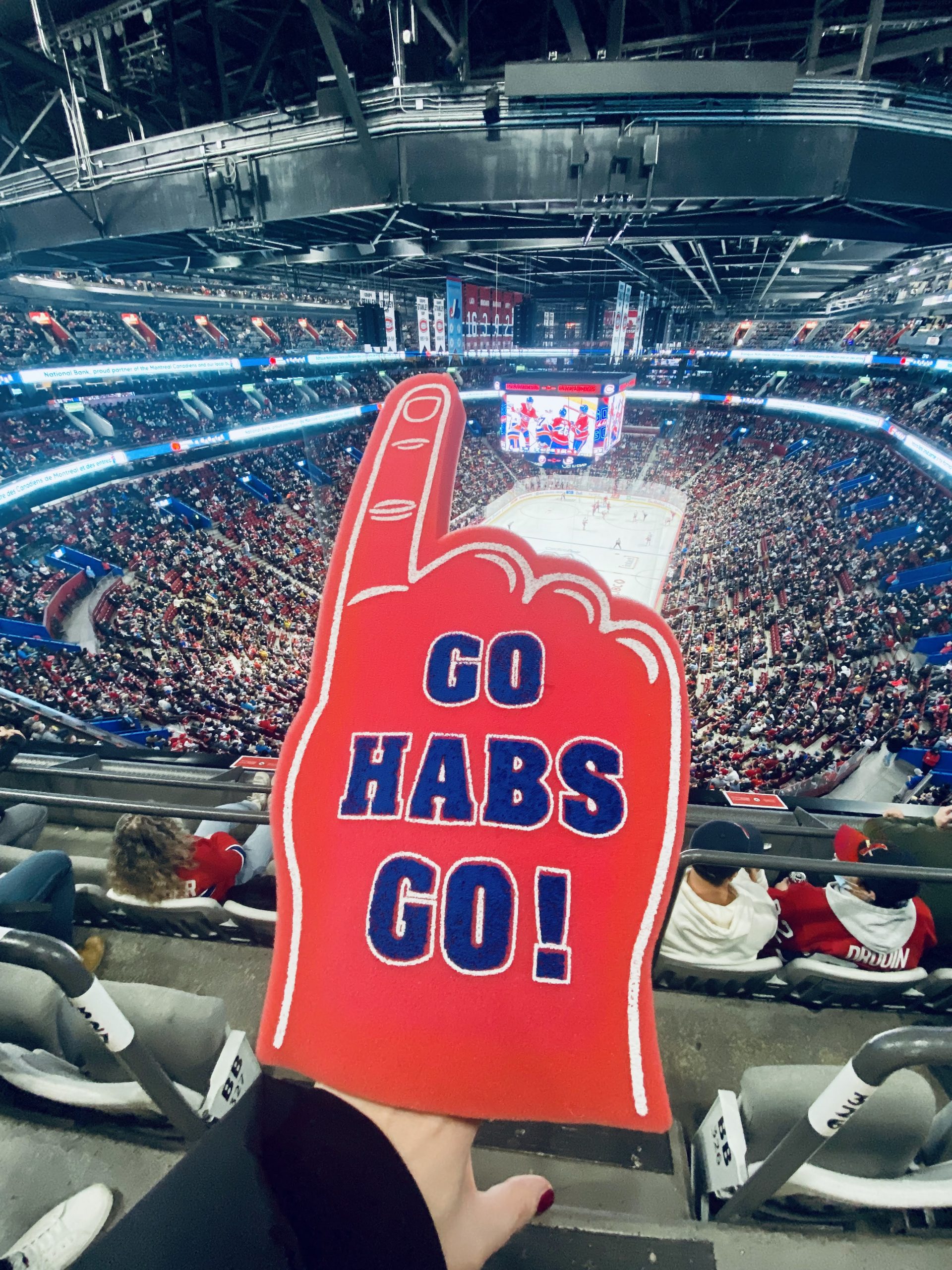 At first glance, you would think that fan chants would have a positive origin, but not all the time and the Montreal Canadiensclub is the exception that proves the rule.

We will go back to the Quebec of the beginning of the XXth century, at that time two hockey teams existed, the Montreal Canadiens, a mainly French-speaking team and the Montreal Maroons, an English-speaking team. The two teams were rivals and over the years the Maroons club died out while the Montreal Canadiens gradually became a real institution in the hockey world. The Anglophones, offended by this setback for their club, found themselves supporting the Canadiens, but they still wanted to throw their weight around and support them by singing the "Go Habs Go" chant.

Indeed, the word "Habs" comes from a pejorative term aimed at French-speaking people living in Quebec, because at that time of the beginning of the 20th century, French-speaking people lived for the most part in the countryside and were for the most part in agriculture. The term habitant at that time was attributed to those people from the countryside, a bit rough and living outside the city.

When the Francophones realised at the time that this song, which had become almost a cult, was ultimately an insult, they decided to replace "Go Habs Go" with "Halte-là les Canadiens sont-là".

It wasn't until about 30 years ago that the famous "Go habs Go" came back with a more positive impetus than it had at first and was able to replace the French saying. If you go to the Bell Centre, be prepared to hear "Go Habs Go", but now you'll know how to explain the history of this chant to your neighbour.

In the last season 2020-2021, nobody expected the Montreal Canadiens to make the Playoffs, they surprised everyone by achieving an extraordinary season. After struggling to qualify for the play-offs, the Montreal club qualified for the conference finals by beating the rival Toronto Maple Leafs in 7 spectacular games.

Then they faced one of the big favourites of the 2020/2021 season, the Vegas Golden Knights. After a complicated start, Montreal ended up winning the conference final (4 wins to 2), a huge joy filled the streets of Montreal to enter the Playoffs for the first time since the last Stanley Cup victory in 1993. This World Cup-like event here in Canada was watched by millions, but the defending Tampa Bay Lightning were too high a step for our Canadiens. They lost that final (4 wins to 1) in an extraordinary series. The 2020-2021 team has won the hearts of old and new fans alike.

What are the PlayOffs?

Hockey in Montreal: buying tickets to see a game

To get tickets to see a Centre Bell game, it's a little more complex, most of the time, you'll have to go to the Canadiens' partner ticket resale sites to get tickets. But don't worry, for games with mid to low-ranking clubs, there will always be affordable ticketsavailable.

The cheapest seats to get to the Bell Center are around $50. If you then want to get closer to the ice and be at the edge of the rink, you'll need a bigger envelope.

Don't worry, the stadiums, ice rinks and other venues in North America are very well designed, so even if you are at the top, you can see the game perfectly.

Visit the official Ticketmaster resale site to get your tickets to see a field hockey game for less!
Pierre

The historical players are immortalized in statues in front of the Bell Centre. We will let you discover this memorial of the greatest players of the CH Montreal, all the statues are accompanied by a small historical note which will help you to understand their exploits.

Recently, the most emblematic player of the Canadiens is the great Carey Price: he has been the goalie of the club for 14 seasons now. Carey was born in Anahim Lake, Canada, and is now the most Quebecois of the Canadiens. No one in Quebec will ever have a bad word to say about this extraordinary player. Here, you will see many people on game days wearing Carey Price's jersey, he is the current legend of the club.
Another player to know is Shea Weber , the Sicamous, BC native who is currently the captain of the Canadiens at the time of writing! However, this year Shea is slowly recovering from an injury and we hope to see him wearing the Montreal Canadiens colours soon. 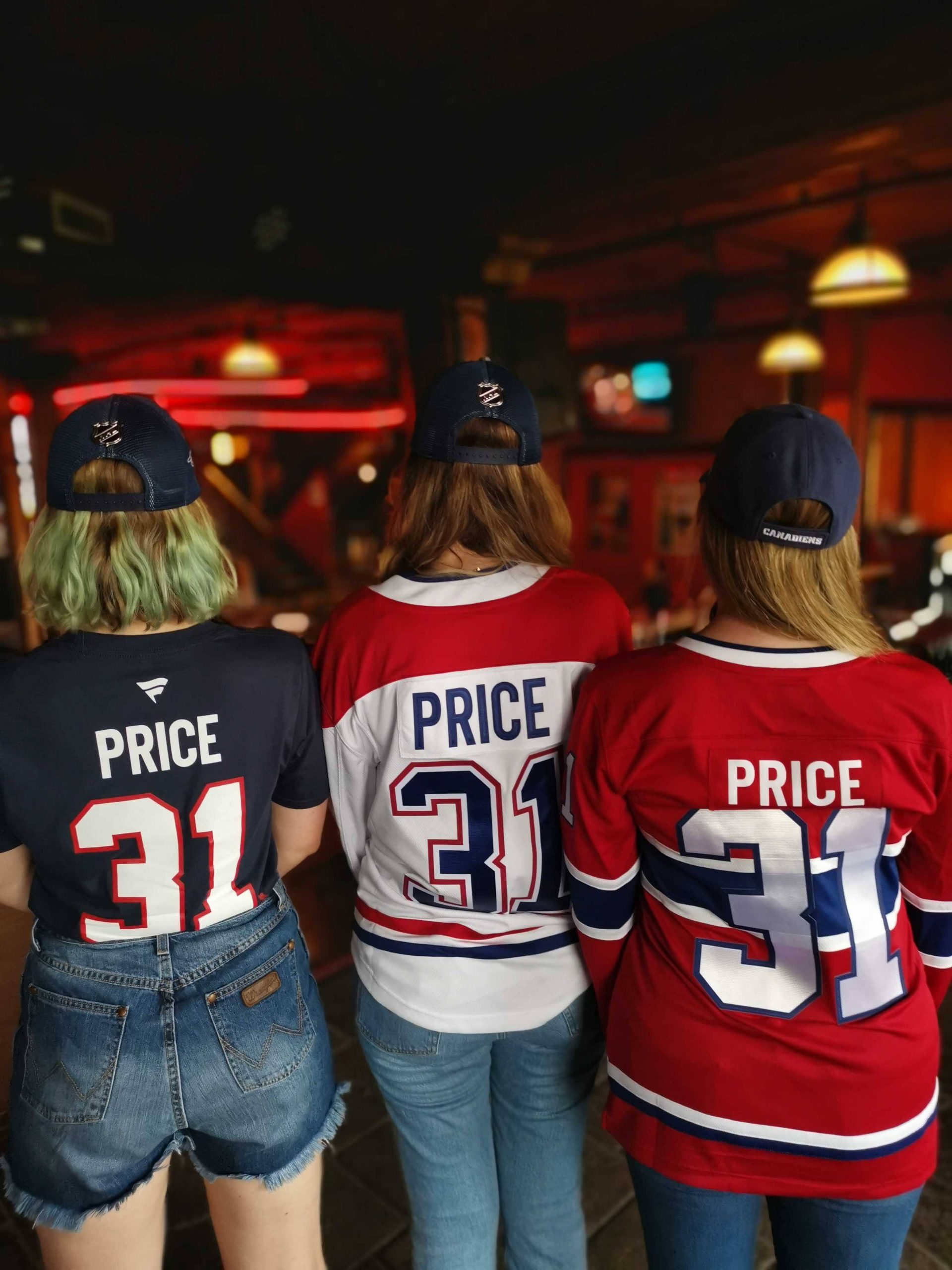 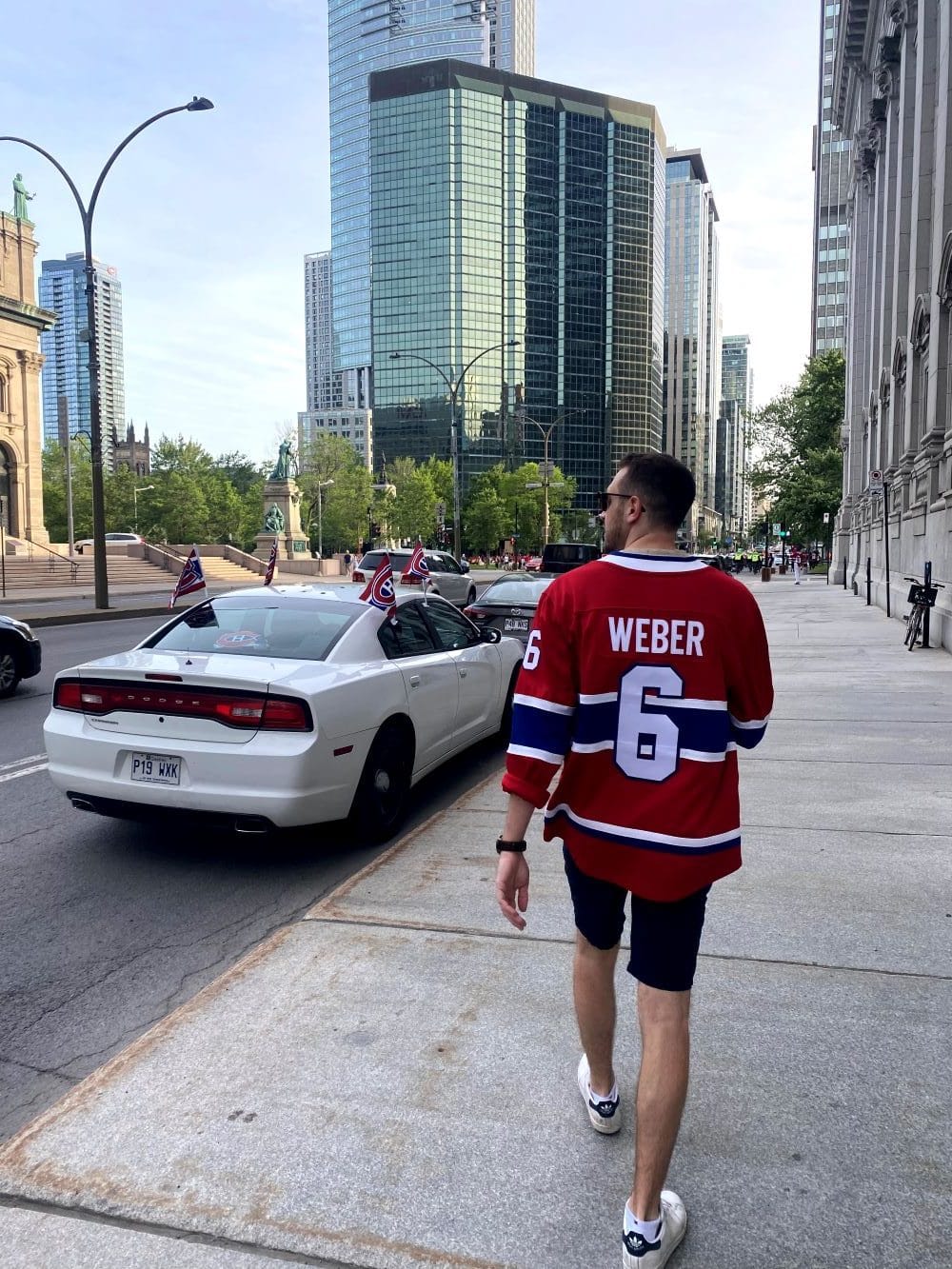 Outside of the Bell Centre, you can always go enjoy a great poutine at a bar that is broadcasting the game, with the amazing atmosphere that comes with the Canadiens. Here are our favourite sports bars to watch the Montreal Canadiens game:

The vocabulary of the hockey pros you need to know

A complete lexicon exists to perform in a conversation between field hockey fans in Quebec, but if you were to learn only a few words about Hockey in Canada, here they are:

Hockey in Canada: how to watch the NHL from France or by streaming

If you are currently in France, you can follow the NHL through the channels of the Canal + Group which owns the French rights until 2022.

If you are in Canada, you can follow the Canadians' exploits on TVA Sports.

Where to play hockey in Montreal?

Before you start playing hockey, why not practice skating first? Although we have little doubt about your level of glide and stability, it is always easier to handle a lacrosse if you can stand on your own two feet!
Take advantage of this, winterMany parks in Montreal and Canada have skating rinks for you to enjoy! Of course, if you prefer to be indoors in the warmth, many arenas will allow you to train all year round. At 1000 rue de la gauchetièreyou'll find the city's busiest indoor rink, which also offers courses for all ages and levels!

So are you ready to jump on the ice and become the next Price of history?

The city of Montreal has set up a portal that allows you to find all the ice rinks around you.

At Maplr, we are passionate about hockey and we regularly offer skating lessons and outings to see hockey games at the Bell Centre or in a bar! For some, winter is a season complicatedFor some people, winter is a season, but for us, it's an opportunity to take advantage of this magnificent season to practice skating and to integrate a little bit more into the Canadian culture!

If you are a Tech looking for opportunities in Canada, don't hesitate to contact us and sign up for our free support program for Canada! 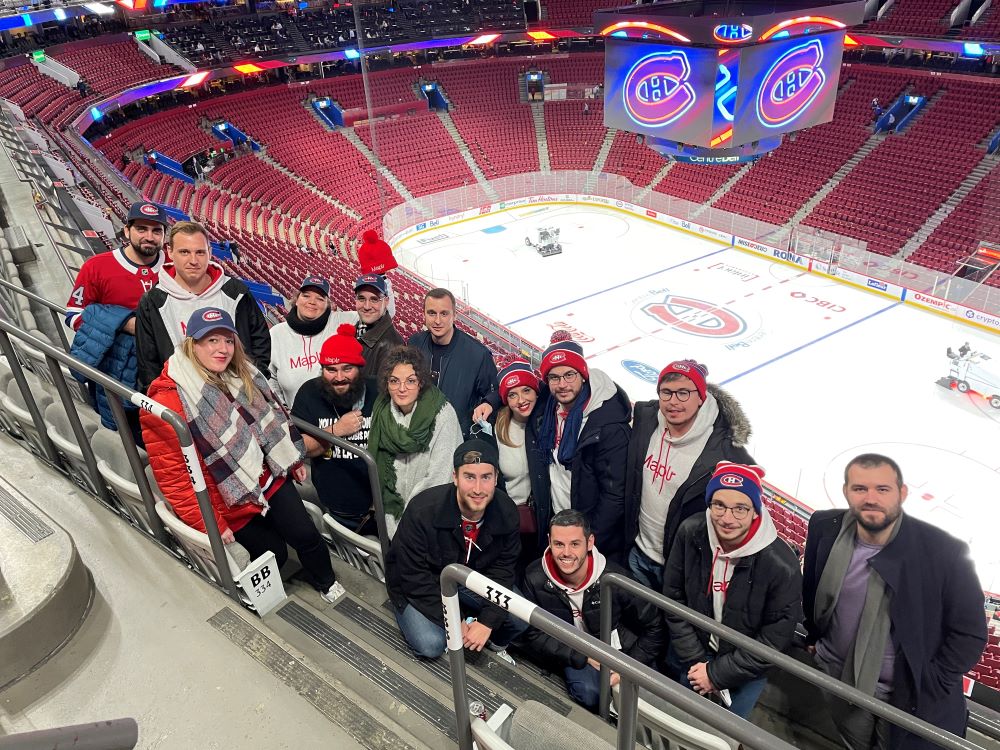 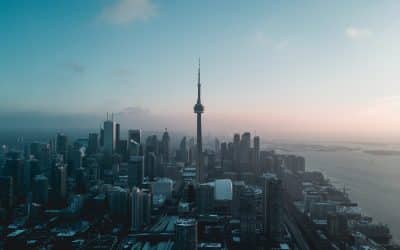 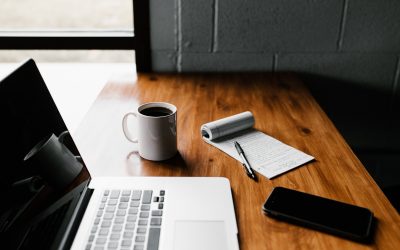 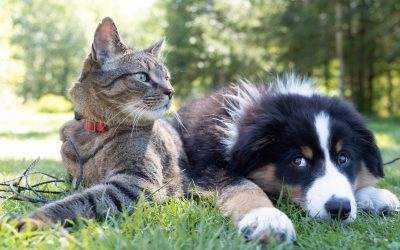